October 2019
One of Australias most awarded editors, Drew Thompson ASE has, like most editors, a bit of the gypsy about him. He works in both his native country at Arc Edit and in the US, where he is represented by Cut+Run. Drew’s diverse body of awarded work includes many genres and styles.
In addition to advertising, Drew has edited feature and short films including the 2018 Academy Award Nominated  “The Eleven O’Clock.”   Now, coming to television, is the miniseries Mr InBetween, for which Drew edited two episodes including the pilot. Directed by Nash Edgerton, the series premiered on September 25 on FX.
We sat down with Drew to go behind the scenes on the project.

Q> How did you become involved in the series?

Drew Thompson> Like most things it wasn’t really planned or pursued, it was a conversation at a barbecue over some beers between my fellow Lead Editor Peter Sciberras and Director Nash Edgerton that started it off. Then we had a meeting with Nash and Producer Michele Bennett about how we would approach the series and oversee it, and then it was on!

Q> What was the most compelling creative challenge?

Drew Thompson> You are constantly addressing details within an episode, within a scene —  performance, coverage, tone — and then you have bigger conceptual challenges, like “does this scene even belong in this episode?” “Will it be better in another episode?” which certainly happened. Besides the specifics of the episode, you keep an eye on the wider arc of the story. Once you get the overarching tone or understand the nuance of the tonal shifts, the roadmap is much clearer.  It informs everything. And it seems obvious but it takes a lot of attention to really get that right.

Q> How did you work with the other editors, to shape the overall feel of the series?

Drew Thompson> I was the first cab off the rank cutting the first two Episodes and they were cut pretty much in order, which set everything in motion.  I’m big on feedback and having an open room, inviting comment and criticism and then we make modifications. We didn’t have major issues with different cutting styles on the show despite there being four editors.  Nash, our director, is with us to explore and guide; he’s a incredible editor so your dialogue with him is amazing.  Scott Ryan who is the creator, writer, and lead actor, was also in all the screenings so we had good hands in there.

Q> Complex characters and morality questions. Is this the age of the anti-hero?

Drew Thompson>With so much great TV at the moment viewers demand to be entertained without being condescended to. Certainly as is the case with our lead character Ray Shoesmith — he has a firm, clear view of the world and his place within it and it’s going to be very hard to make him deviate from that. The fact that very few of us think like him makes it all the more intriguing. I love characters like that, I don’t want to watch Bob from down the road washing his Prius, he’s boring, sorry Bob. Give me Omar from “The Wire” any day.

Q> What does it mean to you personally to have the show premiere in the US? How has it been received at home?

Drew Thompson> I love when we create and it travels. I was excited when MIB premiered at Sundance and I think was the only non US show to screen there so that is pretty killer. No pun intended (okay it was). The broader the audience the better.  It’s brilliant that FX are screening and branding it as an FX Original. That’s pretty cool. As for screening in OZ I think it shows in October, the US has it first.

Q> How does your work in advertising inform your longer format projects and vice versa?

Drew Thompson> Such a great question because certainly both benefit from the other. From commercials I am used to looking at a lot of film and picking the nuts out of it, you become very good at finding ways to truncate a story, and move and motivate a story when you need to. One week you get to flex your muscles with flashy overt editing, and the next may require invisible seamless editing. With long from, you learn how to pick your line, how to block out a scene, who to cut to and why, when and when not to unveil information to the audience, and how to balance the pace of a film or a tv show. In long form decisions you make at the start have massive ramifications and that can be a jigsaw puzzle.  So for me you apply your collective experience to whatever projects you work on and draw on your full arsenal of tools.

Q> How do you see this shaping your work moving forward?  Does it influence your future goals in any way?

Drew: You are always judged on your work, and people in the industry get to see it well before it goes to air. This project is over a year old now and I have cut a feature and a number of commercials in that time. I don’t think it has an influence over my goals, you just want to do the best, most well thought out conceptual work that you can get your hands on, be that commercials, tv or film. I like working in all of those mediums, it give me choices and flexibility and for that I am eternally grateful. 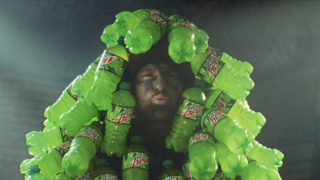