Drew Thompson recently lent his hand to ‘Little Monsters’, the new zombie-horror-comedy from director Abe Forsythe. The project marked a particularly interesting challenge for him due to his job piecing together a cohesive narrative of a zombie film featuring lots of kids that weren’t allowed to be exposed to the gory imagery and expletive dialogue that filled much of the movie. Here, he reveals more about the process.

Q> First off, to dispel any confusion, this is not the 1989 black comedy Little Monsters starring Fred Savage. But it does have the occasional comedic moment, as every good horror film should, correct?

Drew> You are correct this has nothing to do with the Fred Savage film but if that misconception gets bums on seats then let’s continue that. Certainly Josh Gad does not play the Fred Savage character in any shape or form. Our Little Monsters is being referred to as a ‘rom-com-zom’ so you are on the money.

Q> The film reunites you with director Abe Forsythe with whom you worked on the feature film DownUnder – what makes you such a good match for each other, creatively?

Drew> Yeah great question. I’m not sure why that is, we both have a very dark sense of humour.  Like most partnerships be that in your personal life or working life, there should be a common ground in aesthetics and world views and a heavy dose of personal respect. We don’t agree on everything and that is also super healthy. Minor note… I do have a lot of incriminating material on him so that may also come into play.

Q> What was the most significant creative challenge on Little Monsters, something that really made you stretch or think as an editor?

Drew> This film had enormous challenges, not just creative, and that started with what we were trying to achieve. We didn’t have a huge budget, the zombies required hours of makeup, we had a bunch of six-year-old kids and the script had a lot of inappropriate content and dialogue. Scenes would be shot with and without kids, so creating the rhythm of a scene in a lot of cases was completely manufactured. Added to that, the kids could only be on set shooting for roughly four hours a day so that creates time pressures for all involved.

But the biggest creative challenge was twofold, first of all finding the tone of scenes and then the overall tone of the film. They’re subtle things that have a massive impact. Abe’s films have significant tonal shifts and he has a strong and very original and distinct voice, so part of you follows traditional filmic language and then shortly thereafter you take a right turn and subvert it.  It’s difficult and I love the ambition and the challenge. The second creative challenge is finding the film within the film, which sounds pretentious but a film always starts revealing its true self at some point, certain themes need to be explored and pushed that were not as significant at script stage. That usually requires a lot of creative problem solving.

Q> Actor Lupita Nyong’o, who stars in the film, impresses me with her interest in jumping from genre to genre. She’s such a presence in everything she does. What was it like to work on something she stars in?

Drew> Lupita is phenomenal. Just bloody amazing on camera, completely focused, super smart and committed and down to earth. She was incredible with the kids, commanding their attention which was a major contribution in itself outside of her as a raw performer. She learned how to play the ukulele, sang for real all the while protecting the kids from the marauding zombies. The camera just loves her, she’s a really courageous actor, puts herself out there and I love that she’s obviously challenging herself as an artist in a very smart way across a broad range of projects.

Q> Have you been to any of the festival screenings or seen it in a movie theater with an audience?

Drew> Yeah we had a bunch of industry test screenings in LA during the editing process and those ones are where you certainly leave the ego at the door and you get the crap kicked out of you. They’re really handy, you don’t want to live in a bubble, you’d rather get honest brutal educated feedback. You sift through that and keep working the material. We also had a large test audience late in the editing process and the numbers and feedback were really great and illuminating. We premiered at Sundance, I went to two screenings there and they were phenomenal. The audience was really into it which is very gratifying. I didn’t make SXSW but word is it was huge.

Q> Who has been your biggest career mentor and why?

Drew> You know I owe a lot to an editor by the name of Larry Bridges who owned a commercial edit house called Red Car. Larry was really influential on a bunch of commercial and now feature film editors. I got a gig there as an assistant editor, he took a massive chance on some kid who had been bugging him from Australia and enabled me to have this wonderful career. Between his radical cutting style and Rob Watzke’s silky smooth cutting they were certainly big influencers early on and I think I adopted and explored both of those styles.

Q> Where do you find creative inspiration?

Drew> I think there is such a huge catalogue of visual stories in all formats so large parts are drawn from that, adding in literature and music, you’ve pretty much got it.

Drew> I’m finishing off a show called Mr Inbetween, directed by Nash Edgerton which is screening on FX. I’ve been cutting the show since April and I finish up next week – once I get over that sense of loss (which certainly happens on long form) I am back into short form world. I’d better get over it quick, I have a campaign starting mid next week. Then the plan is to engage in commercials for quite a chunk of time, which I’m really looking forward to. 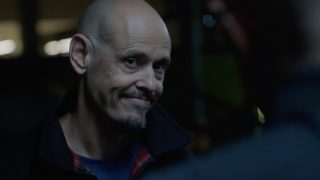