Mah Ferraz is a multi-award winning film editor with a masterful touch and a blistering portfolio who is now part of the Cut+Run dynamic roster of talent. Indeed, to observe her collaborations is to know the disarming intensity of filmed storytelling coupled with the raw power of editing. Mah’s approach is both edgy and sensitive; her elegant use of sound design and rhythm to drive both anthemic spots and emotional visual storytelling showcases her transcendent versatility and unique perspective to her craft.

“Over and over I have watched work that takes my breath away, only to learn that the editor behind each incredible piece was Mah. She is truly a force of creativity, who blends imagination and technique in a rarefied way,” comments Michelle Eskin, Managing Partner, Cut+Run.

Being a Latinx woman and part of the LGBTQA+ community, Mah often uses her voice to collaborate on work with a powerful social message, such as Oreo’s “Proud Parent” and Megan Thee Stallion’s New York Times Op-Ed piece, “Why I speak up for Balck Women.” Mah’s international presence includes work in Brazil, UK, Portugal, Germany and Nigeria, along with Spanish-speaking work from Spain and Puerto Rico.

“Editing is my art; it’s the way I express my creativity. I’m very passionate about it and try to add my fingerprint and vision into anything I touch,” says Mah.

A candid conversation about editing and the state of the industry with Cut+Run Founder Steve Gandolfi was, in fact, instrumental in the decision to join Cut+Run. Understanding the culture and genuine connectedness at the company, Mah was struck by the frankness with which he and the other company partners spoke about why and how they operated in the world.

In 2019, Mah became the first editor to become a Young Gun. Other Awards and nominations include Webbys, The One Show, ADC, The MVPA, One Screen, and Berlin Commercial. Her work has been featured in The New York Times, Nowness, Paper Magazine, Vogue, Elle Magazine, The Atlantic, It’s Nice That, and has also been Vimeo Staff Picked five times. 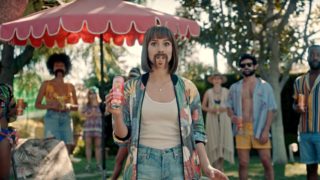